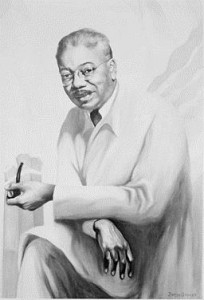 African American painter Aaron Douglas was born on this day in 1899 in Topeka, Kansas.  He moved to Harlem in 1925 and began producing illustrations for magazines associated with the Harlem Renaissance.  He was considered “The Father of African American Art”, but that title led him to say, “Do not call me the Father of African American Art, for I am just a son of Africa, and paint for what inspires me.” He founded the Art Department at Fisk University in Nashville, Tennessee, where he taught for twenty-seven years.  Douglas died February 3, 1979. The Core Ensemble celebrates this great artist in its touring musical theatre piece, “Of Ebony Embers-Vignettes of the Harlem Renaissance”: http://www.coreensemble.com/shows-on-tour/of-ebony-embers/